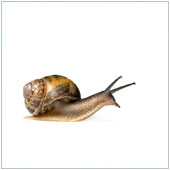 5 Reasons your Computer is Running Slow

Computers are wonderful machines, they have made our lives infinitely easier and it seems that nearly everything has a computer of some varying degree running it. Most company bosses expect their business computers to run at a speed that meets their needs. Over time, however, the speed at which they operate will decrease, meaning computers run slower. Why does this happen?

Here are five reasons why your computer may run slow:

It’s all in the mind

Well, mostly all in the mind. Technology, especially laptops and mobile devices, is advancing at such a fast pace that new devices constantly push speed boundaries. Use a laptop from last year and it just feels slow, when in truth the difference between last year’s and this year’s model is normally not noticeable performance wise.

Another reason is because of the other devices we use. Think of any new flagship mobile device, it’s really fast; most of us have and use these devices on a daily basis. While they may not look it on paper, many mobile apps are simply faster than their desktop counterparts.

Think of accessing email on your computer. You have to find the program, click on it, wait for it to load and then wait for the program to fetch new emails. Compare this to your mobile device where you tap the Email icon and have nearly instant access. While both programs offer the same service, they do work differently with mobile apps, constantly looking for emails while computer counterparts usually look for emails only when the program is open. This usually means the mobile app is perceived to be quicker.

It’s partly because of experiences like this, that everything is available instantly on the mobile device and less so on computers, that some users perceive their system is running slowly due to being used to using a mobile device.

Another reason why your computer might be running slowly is because of the programs you’ve downloaded. If you torrent, visit explicit websites or simply click on and agree to everything, your computer will run slowly because many of those seemingly helpful programs are actually malware or viruses that when installed will slow your computer down, or worse steal confidential information and files.

The same goes for explicit websites and torrents. Many of the ads and pop-ups contain viruses that can install themselves, or be installed without you knowing. For torrents, files may contain viruses disguised as movies or other popular file types. If you torrent or visit explicit websites you should have malware and virus scanners operational and up-to-date. That new movie just out in theaters and already a torrent? It’s likely a virus, steer clear of them. It’s probably better if you don’t download illegal torrents at all.

It’s how you run it

There’s a common belief out there that computers are meant to be left on and that turning a computer off will somehow harm the internal components. This is a myth, there are only three times a computer should be constantly on:

If your computer doesn’t fall into these criteria, then it’s perfectly safe to turn it off. What does this have to do with a slow computer? Computers left constantly running have proven to have increased degradation of both kinds of memory, especially RAM; and the processor. Both RAM and the processor are integral components related to running programs. A degraded stick of RAM or a stressed processor will slow computers down. Turning a computer off when, not in use will extend the life of the components while also reducing electrical draw, meaning cheaper electric bills.

Most offices, stores, and homes now have Wi-Fi. The only issue is, current Wi-Fi routers are limited in the connection speeds they can offer. Have a 300Mb connection, and an 85 Mbps Wi-Fi router? The Wi-Fi connection speed will be a maximum of 85 Mbps, which will decrease depending on how far you are from the router and how many users or devices there are connected.

If you’ve had the router for more than a couple of years, and noticed that your computer is really slow when surfing the Internet or running Internet-related programs like Office 365 or online games, it may be time to upgrade to a faster router. If your business connection is slow, then it’s best to contact a vendor to help upgrade all your systems. This could also indicate a virus or other form of malware infecting your system. Running a Virus and malware scan could help as well.

Finally, your computer may be running slow because it’s old. A PC or Mac from 5-7 years ago has close to the same processing power of the modern smartphone. Combine this with constant use – especially for laptops – a full hard drive, and any of the above reasons, and your computer will be slow compared to when it was brand new. You can try wiping the hard drive and starting again, but computers older than about seven years will likely not be able to run the most modern programs efficiently.

For example: Still on a computer running Windows XP and want to upgrade your current copy of Microsoft Office to 2013 when it’s released? Not going to work. Using a MacBook from 5 years ago, and want to upgrade to OS X 10.8 to take advantage of the supposed speed gains? Most MacBooks won’t be able to run it efficiently enough to notice a gain in speed, resulting in a slower operating experience.

There are many reasons as to why your computer is running slowly. If you’re unsure, you can always contact us, we can help.